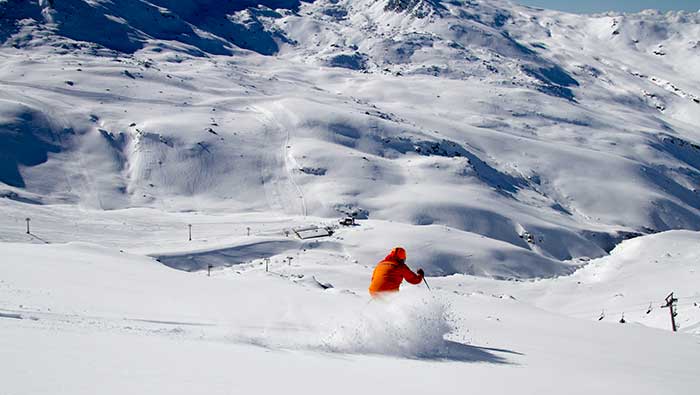 Advanced skiers will find plenty of action both on the Veleta peak and in the Laguna valley. Filled with challenging reds and a couple of “Itinerary” (unpisted) black runs, there is also ample off-piste terrain overshadowed by the crags of the “Tajos de la Virgen” and the “Cartuja” peak.

Unlike other areas within the ski terrain, the Laguna holds much more of an Alpìne feel by being surrounded by peaks as opposed to looking down over the valley and beyond. The sense of actually being in another resort can be overwhelming at times!

From the top of the Zayas T-bar and the Laguna chairlift, do not miss the stunning views out to sea and, on clearer days, the Rif Mountains outlining the coastline of Morocco. Catching the afternoon sun transforming the sea to a sparkling golden blanket dotted with ships of varying sizes is perhaps one of the most memorable sights to take away with you!

Mountaineering expeditions lead off from this point to the back country areas such as into the Alpujarras or around to the Guarnón and San Juan valleys for some spectacular experiences.

The Zayas T-bar leads to the longest run in the resort, the “Aguila” (Eagle), which runs for 6.1 kilometres practically from the Veleta peak to the village base. The Zayas and Panoramica reds offer wide, steep and superbly consistent slopes from advanced training or simple blasting according to preferences. Head across to the “Descenso Hombres” pìste and imagine shussing in a straight line from there as they did in the World Cup Downhill event of 1996 and also in a couple of other world class events since then.