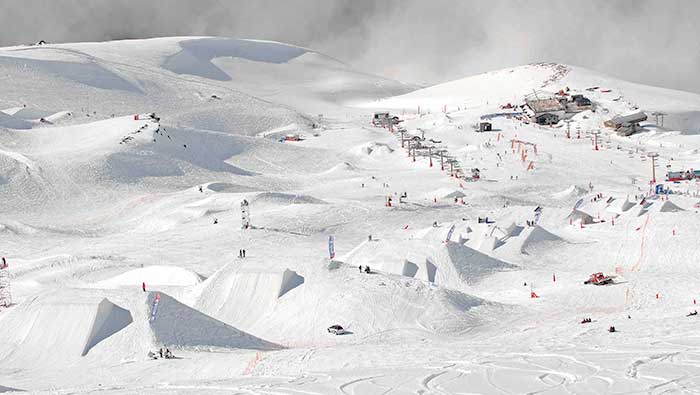 This stunning area offers spectacular views over the vale of Granada and boasts a superb array of long, wide blue runs providing ample ski entertainment among its rolling hillocks and soft ridges. Now home to one of Europe’s officially quoted “best” snowparks, the “Sulayr Superpark”.

This is a great area for getting your teeth into the technique and sensations of carving and free riding which has exploded on the slopes over recent years. Heavy implementation of snow cannons in the area have guaranteed great skiing here. The area is typically quieter than Borreguiles, making for a peaceful escape from the hubbub of high season periods.

The World Cup Giant Slalom and Slalom black runs, the “Fuente del Tesoro” and “Neveros” are accessed from this area as well as a few others which are guaranteed to test your speed control or at the very least your adrenaline limits. The expansive, gentle rolling, open fields that make up the Loma de Dílar area make it a superb spot for also enjoying and improving off-piste techniques after fresh snow falls.

The 2014-15 winter season saw the Superpark hit new heights by creating the longest line of slopestyle in Europe. With a total of 71 different modules and ramps. It is possible to rack up to 46 of these in just one descent!

Slopestyle has been of significant focus since 2012-13 in particular and it has paid off very well indeed with Sierra Nevada receiving International acclaim for its efforts and design ingenuity. Having hosted world class events including the World Junior Championships (2012), the World Snowboarding and Freestyle Championship Finals (2014) and the Winter Universiade Games (2015).

The halfpipe is Spain’s largest, descending an impressive 165 metres with walls over 6 metres high.