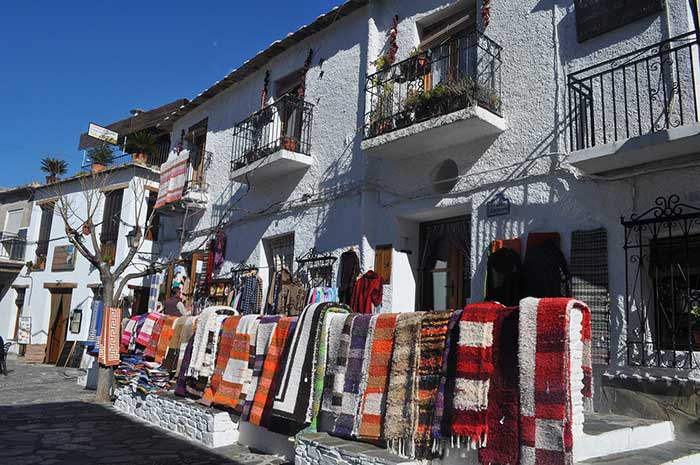 About 1½ hour’s drive from the Sierra Nevada ski resort, along a route which circumnavigates the mountains, is the south face of Sierra Nevada known as Las Alpujarras.

These are the lower mountains that lead up to the Sierra Nevada from the sea, and are home to some of the most exquisite white villages in the region, where it feels as if time has stood still.

Though it has become popular with Spanish and foreign visitors in recent years, the Alpujarras still retains loads of original character, with narrow village streets winding up the mountain side, flat slate roofed houses, and waterways running down the centre of many of its cobbled streets. The three most famous are Pampaneira, Bubión and Capileira which run up the Poqueira gorge. All 3 villages have received the ‘Most Beautiful Villages of Spain’ award. The setting is idyllic with views up to the snow on the Veleta peak in the Sierra Nevada.

Many rural traditions are still just as much in evidence as in decades gone by. In Bubión you will find a workshop that still makes rugs (jarapas) in the traditional manner which is the only one that remains in the region.

Slightly deeper into the Alpujarras, another superb little village is Trevelez, the highest village in Spain at 1,400 metres and well known for its character, stunning views and locally cured mountain ham (jamón serrano). Wherever you visit in the Alpujarras, don’t forget to try the jamón, which is one of Spain’s best known and most delicious culinary delights. The dry mountain air makes this region the perfect environment for natural air-dried ham.

Another traditional dish you can try is the plato alpujarreño, a hearty country dish consisting of jamón serrano, spicy chorizo sausage, morcilla blood sausage, fried egg and patatas a lo pobre (poor man’s potatoes), a fry up of potatoes sautéed in olive oil with onions and green peppers. This is definitely a dish for a large appetite!