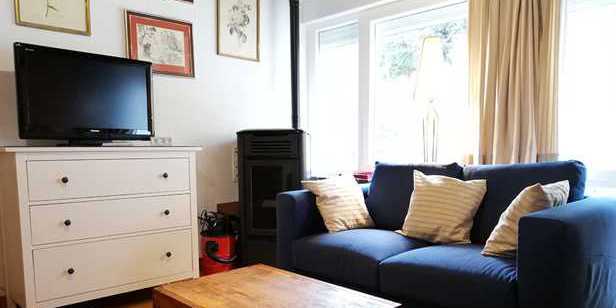 This apartment is in a great location within the mid zone. It is close to the nightlife area of the resort without being affected by noise and other disturbances. It is also close to the mid-stop of the Parador chairlift which takes four minutes to take you down to the central squares area of the lower zone which is where the main lifts up to the slopes are found as well as the majority of shops and restaurants.

There is only one shower-room which may be considered limited when using the apartment to its full occupancy, though there is also a separate extra toilet with washbasin.

The kitchenette is equipped with the basics for self-catering and has a decent-sized fridge-freezer, but only has a two-ring electric hob. It is separate from the lounge which is spacious, bright and has a pellet stove which supplies heat to all the radiators in the apartment. The pellets are included.

A bonus with this accommodation is that it has a parking slot included!

*the upper bunks do not have safety rails